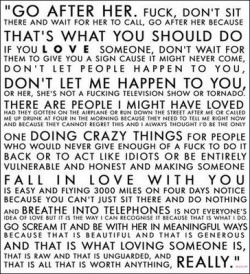 I was super bored last night and found my Ate's DVD. I tried to watch this movie "Pano Na Kaya". It is a tagalog movie which is all about rebound love. I thought it was corny at first, like I wouldn't be able to finish the film. Anywho, it made me cry a lot. Heck yeah! It made me cry a lot! Like I've been crying since the female lead starts to cry in the movie until the end. I was surprised to myself 'cause I don't cry easily by just watching a movie or any dramas on TV. The movies and dramas beside from this one that really made me cry are Hachiko (Dog tale), Message in a bottle, A walk to remember, A moment to remember (Korean Movie), Windstruck (Korean Movie) and Save The Last Dance For Me (Korean Drama). Well, I am so curious if what is really a rebound relationship like, or if I had been into a rebound relationship. Because of curiosity, I tried to check on google what that really means and how to find out if I experienced to be a rebound. I want to know if the phrase "Women can fake an orgasm but men can fake the whole relationship" is true.

According to this one site, here are some things to look for if you had and have been in a rebound relationship.


IF YOU ARE RECENTLY GOT OUT OF A RELATIONSHIP:

IF YOU ARE WORRIED YOU MIGHT BE SOMEONE'S REBOUND:
☼ They move at a really fast pace.
☼ They don't take the time to get to know you.
☼ They still talk about their ex.
☼ They compare you to their ex. Even if this is in positive light, it's not good.
☼ They're needy.Some people simply don't want to be single for long. If you have trouble imagining what they would                  do with their spare time if they didn't have a significant other, that's a bad sign.
☼ They have a history of going from relationship, right into another.
☼ You have a tendency of wanting to "rescue" people.
☼ Consider being their friend, rather than their lover.
☼ Look for a person having a desire to keep your relationship a secret, or show it off a lot.

Now I know why I suddenly gets emotional. I was a rebound girl. It was painful and it is like your hiding behind of a silhouette curtain. You can hide it to others but not to yourself. No one forced him to love him neither I. It hurts to think that he was the one who gave me option to love him. Anywho, it doesn't matter now, it's good to know that I've been single for a pretty long time. To think it's much better to be in this way, away from karma. Less mistakes less dramas. I just realized what I always say to myself is wrong, that the only cure for break up is to get into a new relationship. You should sort out your feelings first and ask yourself if you are ready to love again. If you think you are in a rebound relationship, or heading towards one, slow down! If you want it to work out, don't rush. It is better to be OFF with the old love before you are ON with the new.